Two Proposals, One on the Set of ‘Hamilton’ 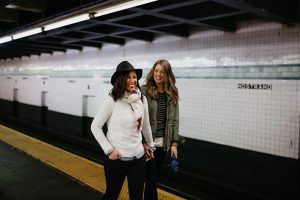 “Ms. Michalos suggested they take a selfie at the spot, but Ms. Pitkin shook her off and suggested they proceed about 20 feet farther down the sidewalk. There, in chalk that had only partially been obliterated by rain, Ms. Pitkin had inscribed almost exactly the same words Ms. Michalos had just uttered: ‘This is where I knew I loved you.’ And, having not known that Ms. Michalos’s proposal would precede it, she’d added her own: “’Will you marry me?'”

Leah and Rachel’s story was also published in print on Sunday, September 17th, 2017 in the Styles section of the New York Times.